​Founded by Franklin Murphy, who was the former governor and New Jersey Legislator, the Murphy Varnish works was the largest varnish producing factory in the City of Newark. It had more than 200 kinds of varnishes in about 1,200 shades of colors.

Born and raised in New Jersey, Franklin Murphy lived quite an extraordinary life.  Attending Newark Academy until 1862, he left to join the army, saying he was 18, the legal age to join,  when in fact he was just sixteen, eventually working his way up to becoming First Lieutenant. After leaving the army in 1865, he partnered up with James Barnet and Thompson Price, to form the Murphy and Company Varnish Manufacturers, eventually buying them out and running the enterprise himself. Franklin Murphy was known for his kindness and fair business practices and was one of the first industries in Newark to institute life insurance with Prudential Insurance Company and pension plans. 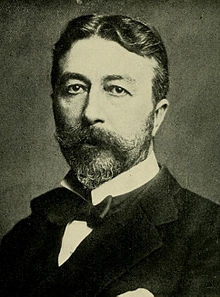 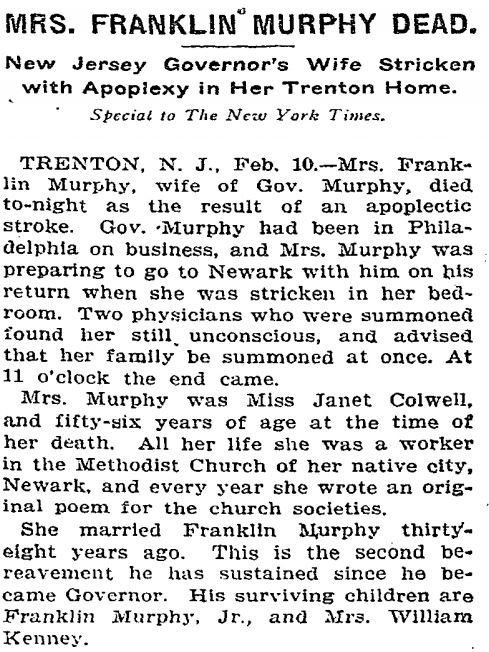 The New York Times
​His business practices were so widely regarded that he is hailed about in an article by the Newark Board of Trade in 1912.
"No other manufacturing industry in Newark has done more than Murphy's Varnish Company to make the city widely known. Its ads have appeared systematically in Journals of international prominence, circulating in every village in the U.S. Its staff visit at regular intervals, every town in the county of 1000 population or more and many towns numbering even less. The important cities of Europe are even cared for and several of its important brands can be found on the dealers and consumers' shelves abroad with the company's label printed in the language of the country, heralding the name of Newark."

Franklin Murphy entered politics and was dedicated to the people. Murphy continued to leave his mark on Newark by pushing for the institution of the Essex County Park System, serving as a board member for the National Home for Disabled Volunteer Soldiers, and heading the committee that planned the 250th anniversary of the founding of Newark.  He was a vital part of the “City Beautiful Movement” in Newark.

​By 1883, he was serving as a Republican on the Common Council, but his political career didn't end there. In 1901, he was elected governor of New Jersey.  With his role in power, he supported labor standards, cracked down on child labor law violations, enforced progressive tenement house codes, made ventilation shafts in tenements a requirement, increased bank interest on state money, made continuous efforts to clean the Passaic River, and is responsible for establishing the tuberculosis sanitarium at Glen Gardner.
​In 1915, he retired and put his son Franklin Jr. in charge as the President of the company.

​In February of 1920, at the age of 74, Murphy passed away and was buried at Mt. Pleasant Cemetery in Newark.  A statue of him can be seen in Weequahic Park in Newark.

​The buildings of the Varnish Company were built between 1870 and 1905 and originally consisted of six buildings. Howard Chapman designed the largest building in Richardsonian Romanesque style, and Newark architect James Lindsey designed the other five. The firehouse across the street was also part of the Murphy works and is done in the Victorian style. The Murphy Varnish Company closed its doors in 1950. The Rambach Chemical Storage facility became the next company to utilize the space, since then its been vacant ...until now.

Murphy Varnish is one of the few industrial factories that remain. The once derelict factory is now in the process of turning  into 40 apartments. I had the opportunity, a few months ago, to get a look into the hard work the firm is putting into bringing the factory back to life. ​The buildings are being restored and converted to mixed uses of residences and professional offices. Parking will be provided both on site, integrated with courtyards and walkways, and engineered to be provided below at the basement level. The adaptive re-use involves the new construction of lobby, stair cores and a top floor to be constructed behind the street façade of the original mansard roof.
Links :
​Janet Colwell Murphy
​A Billy Yank Governor - Bernard A. Olsen
Powered by